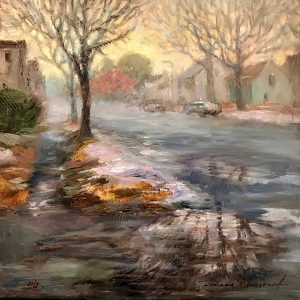 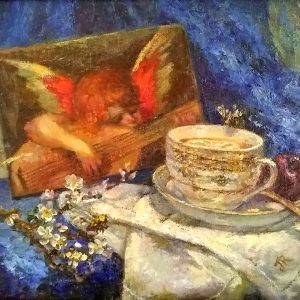 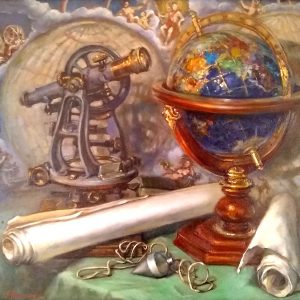 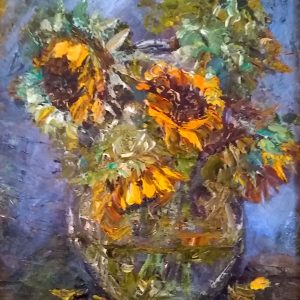 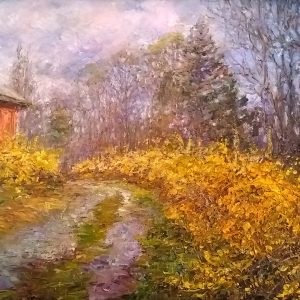 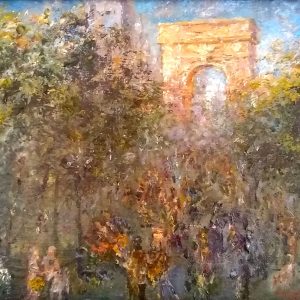 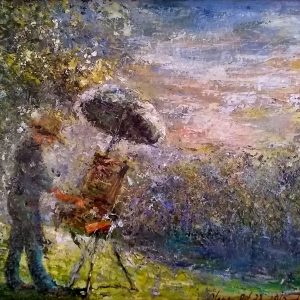 Tatiana Rhinevault was born in Moscow and spent much of her childhood playing in Sokolniki Park, watching artists paint day-in and day-out. Because of her exposure to Moscow’s many museums, theaters, and art studios, the arts played a huge role in her childhood and, ultimately, in her paintings. Her elder brother, a musician, instilled in Tatiana a love for American jazz, and many of her friends were musicians who played classical Renaissance compositions. Tatiana learned to play the cello and has always made music a strong presence in her work.

At 17, Tatiana found her first job as a make-up artist in the famous Vakhtangov Theater in Moscow. Although she traveled extensively throughout Russia with the theater group, the exciting lifestyle that Tatiana was leading was at odds with her desire to attain her artistic dreams. In order to refocus on her passion for painting, she competed for, and won, one of the few available spots as a student at the Moscow Institute. After earning her Master’s Degree in Art, she found work restoring icons in Moscow’s old churches and, often, painted new ones. She visited and painted in many countries throughout Europe, including Hungary, Yugoslavia, Spain, Holland, France, and Italy.

Tatiana’s love of all of the Renaissance Arts is reflected in her work. Most of her paintings include a musical instrument or score, paintbrushes or palette or literature of some kind. More specifically, she often includes paintings within her paintings.

Tatiana works in several mediums including water color, acrylic and oil. She utilizes rich dark colors in combination with diffused window light to create a calming but magnetic space. She creates windows through which one can see the old streets and monuments of Europe.

In 1990 she met her husband while working on a project for the US Embassy in Moscow. She moved with him to the United States. They live in Hyde Park, New York with their son, Peter Vermeer Rhinevault.